Prompted by user Skimask over on the eevblog forums, I undertook some performance testing of an AD9850 module, readily available from eBay (search 'AD9850 DDS') for under $10 shipped. These are advertised as 0-40MHz devices, and appear to include the datasheet-recommended 5-pole output filter and a 125MHz canned oscillator. Measured distortion and spurious performance is excellent, especially for the bargain-basement price.

Skimask was curious about the performance at audio frequencies, so I undertook some measurements at 1KHz and 5V. It appears these modules live up to at least the AD9850 1MHz spec when outputting audio frequency, so they're fairly good audio generators.

On initial testing I noticed a significant glitch appearing on the output waveform at the same spot in each cycle. Later investigation revealed that it was caused by the square wave comparator outputs adjacent to the signal output. Adjusting the potentiometer on the module (which controls the comparator trigger voltage) out of range of the signal removed the glitches.

And the much more interesting, but still undramatic frequency domain, captured with my emu 1212m - with this measurement setup and FFT configuration the measured noise floor appears at -130dBm except for a spur up to -120dBm at about 32khz - we're measuring the module here: 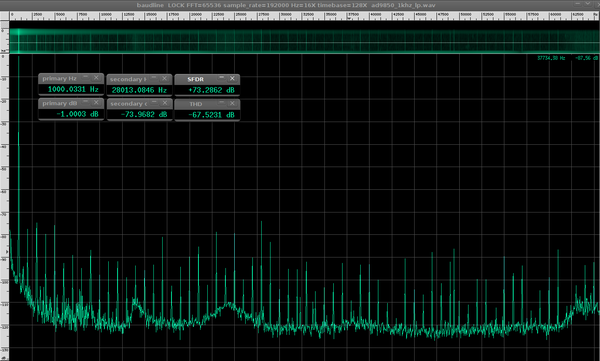